This search form uses an instant search feature. As you type, search results will appear automatically below the search field. When you've entered you desired search terms use tab to navigate through the available results and hit enter to open the selected page or document.
Judd School Sensory Path
Joseph Schmidt
Friday, December 13, 2019 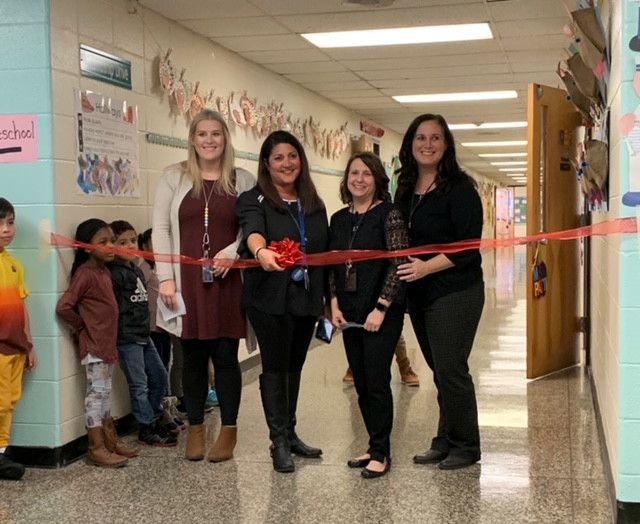 “Shake the sillies out and get the wiggles out,” said Fran Alvarez, a Kindergarten teacher at Judd Elementary School.

On Dec. 3, the staff at the North Brunswick school held a ribbon cutting for the school’s new sensory pathways,which are  hallways that are outfitted with decals on the floor and walls to stimulate activity for all students.

Each hallway has a different design and is located near a specific grade’s hallway, though students can go through whichever course they’d like for their “brain break.”

There are letters, numbers, three-dimensional shapes, footprints in the sand, an under the sea theme, a dinosaur/volcano theme, and an infinity walk.

“The cool, cool thing is that this is going to help so many of our kids,” Principal Joseph Schmidt said.

The pathway near the classrooms for the children with autism has an entire sensory bulletin board that includes locks, a scratch pad, an old keyboard and calculator, a pinwheel, sponges and a tile to step on. Schmidt said the “therapeutic” activities are of different textures to stimulate the children.

“While they are waiting [for the bus] they are using these interactive things,” Alvarez said.

There are also words on the walls for students who are non-verbal to touch and thus communicate.

Or, for example, there are buckles which students are taught to use as part of their IEP (Individualized Education Program).

“It’s not just for fun, but it’s meaningful so they meet their goals as well,” said fourth grade teacher Stacie Oliveri.

The pathways are used as an effort to refocus, as a reward, or as a way to counteract the dreary weather during recess.

“It’s close to my classroom so when I’m done I can go back and do my classwork,” fourth grader Hope Goida said.

“After you do the path it can make you more focused. If you have a hard time you can take a breather for two minutes and you can come back nice and relaxed,” fourth grader Aanya Malhotra said.

The impetus for the project was when Oliveri saw a post on Facebook from a friend who implemented a sensory pathway in her school in Edison.

“Walking around school is not enough to help them come back and focus,” said Oliveri, whose two daughters have attention deficit hyperactivity disorder (ADHD). She said her daughters have difficulty staying focused, since their bodies are trying to do the opposite of what they should, so they need to get the movement out.

Alvarez, who runs with Carla Scaturro, principal and producer of Scaturro Insurance Agency of North Brunswick, a division of Farmers Insurance, mentioned the idea, and Scaturro was on board, since her two children are Judd graduates.

Scaturro said she presented the idea to a marketing representative, who just happens to have a son who is on the autism spectrum, and that person took the idea to corporate.

“Farmers loves doing things for the community,” she said. “It was very rewarding for me as a parent and business owner to help the school obtain the $2,500 grant to implement the sensory path at Judd Elementary and help our community in any possible way we can.”

The team also sought the Attendance Matters grant through the district’s supervisor of nursing, Maryann Engel.

Schmidt then asked for the formation of a committee at the school, which included Oliveri, Alvarez, second grade teacher Rebecca McLean and fourth grade teacher Nancy McAdam.

The committee researched different websites, ordered the decals, asked parents involved with the school’s Parent-Teacher Organization to cut them from the vinyl sheets, then applied adhesives to the floor during a teacher development day on Nov. 4, and finally waxed over the paths.

The students were surprised with the paths when they returned to school on Nov. 11. An official ribbon cutting was held when the school opened up after Thanksgiving break on Dec. 3.

“It was the first day back after break … and it looked like the kids on Christmas Day … if you could only bottle up the excitement,” Alvarez said.

Oliveri said teachers benefit as well “to get our blood pressure up and not fall asleep.”

Fourth grader Chris Ruiz said he loves the pathway with the dinosaurs since it is “prehistoric.”

“You can be more focused on what you are learning and what you’re doing” after completing the path, he said.